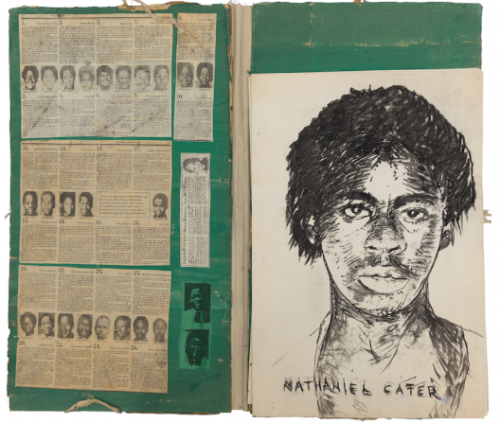 From 1979-1981, over twenty-eight children and young adults were abducted and murdered in the city of Atlanta. Collectively known as the Atlanta child murders, the killings drew the attention of the nation and altered daily life in the de facto capital of the South. The city imposed curfews. Some parents withdrew their children from school and forbade them from playing outside. On June 21, 1981, Wayne Williams was arrested and ultimately convicted of two murders and sentenced to two consecutive life terms. This past March, the Mayor of Atlanta, Keisha Bottoms, reopened the cases hoping to use modern technology to lead to further convictions. Williams maintains his innocence.

On Mother’s Day, May 10, 1981 approximately one month before Williams’ arrest, Mimi Gross, an artist and young single mother, had just moved into a new apartment in New York City’s Tribeca neighborhood. She had read about the events in the New York Times and requested that a friend send her a copy of the Washington Post since they had published images of the children. Gross remembers drawing the portraits on the floor of her apartment over a period of a few days—maybe less. The portraits were never intended for public display; they were an essential visual and emotional response to events that overwhelmed Gross, an artist who draws constantly. Indeed, drawing is one of her primary tools for understanding the world and connecting to it.

This installation is presented by Atlanta Contemporary in conjunction with the Contemporary On-Site program and is curated by Institute 293.