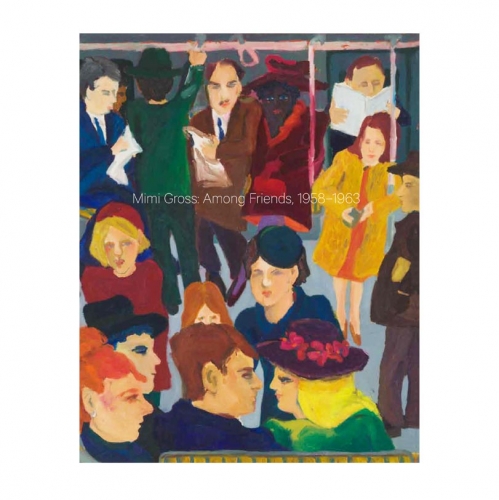 Mimi Gross: Among Friends, 1958-1963 accompanies an exhibition at Eric Firestone Gallery, New York (February – May 2019).  With over 30 color plates, installation images, documentary photographs and an essay by Mira Schor,the catalog focuses on the early work of Mimi Gross, who was born in 1940 and grew up in Manhattan. Her father was Chaim Gross, the sculptor known for woodcarving. Her parents were art collectors with a vast network of art world friends and colleagues. In the summer of 1958, Gross lived in Provincetown and became friends with Bob Thompson. Another close friend was artist Jay Milder, who would introduce Gross to Red Grooms (who was Gross’s husband and artistic collaborator from 1960-76).  In 1959, Gross traveled to Europe. She went to Salzburg and studied with Oscar Kokoschka. In the summer of 1961, along with Grooms and three friends, Gross traveled from Florence to Venice in a horse-drawn carriage, stopping at villages to stage a shadow puppet show. The project, titled Il Piccolo Circo d’Ombre di Firenze, became raw material for dozens of paintings and works on paper. Gross filled sketchbooks with portraits of people they encountered, landscapes of the rolling hills, and images of the piazzas, frescoes, and Duomos.  The exhibition catalog also includes portraits made in New York City in 1962-63, and paintings of people on the subway.  Gross considers portraiture a form of mutual collaboration; her paintings have a poignant expressiveness and connection to the subject. Hers is a world of bold, unapologetic color.