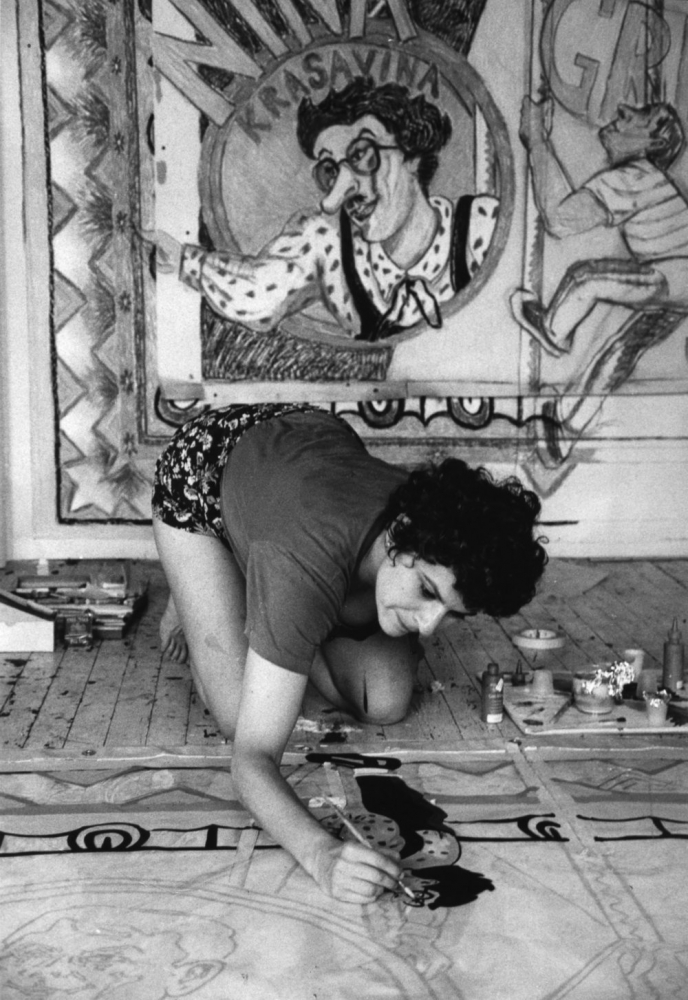 Mimi Gross is a painter, as well as a set-and-costume designer, and maker of interior and exterior installations.  She has lived and worked in TriBeCa for the last 40 years, and is known especially for her portraiture, and for working with oil crayon and chalk pastel, in addition to oil paint. Gross considers portraiture a form of mutual collaboration. Her paintings have a poignant expressiveness and connection to the subject. Hers is a world of bold, unapologetic color.  The directness of Gross’s portraiture, and her propensity to paint all aspects of her community can be linked in particular to the work of Alice Neel, who was a close friend.

Gross attended high school at the High School of Music and Art (now LaGuardia High School), and entered Bard College in 1957, where she studied for two years. Her early paintings of the 1950s and 60s explored her growing community of friends and acquaintances.  In the summer of 1958, Gross lived in Provincetown and became friends with Bob Thompson. Another friend was artist Jay Milder, who would introduce Gross to Red Grooms (who became her husband and artistic collaborator from 1960-76).  In 1958, Milder and Grooms founded the City Gallery, an artist cooperative where Gross exhibited her work for the first time. 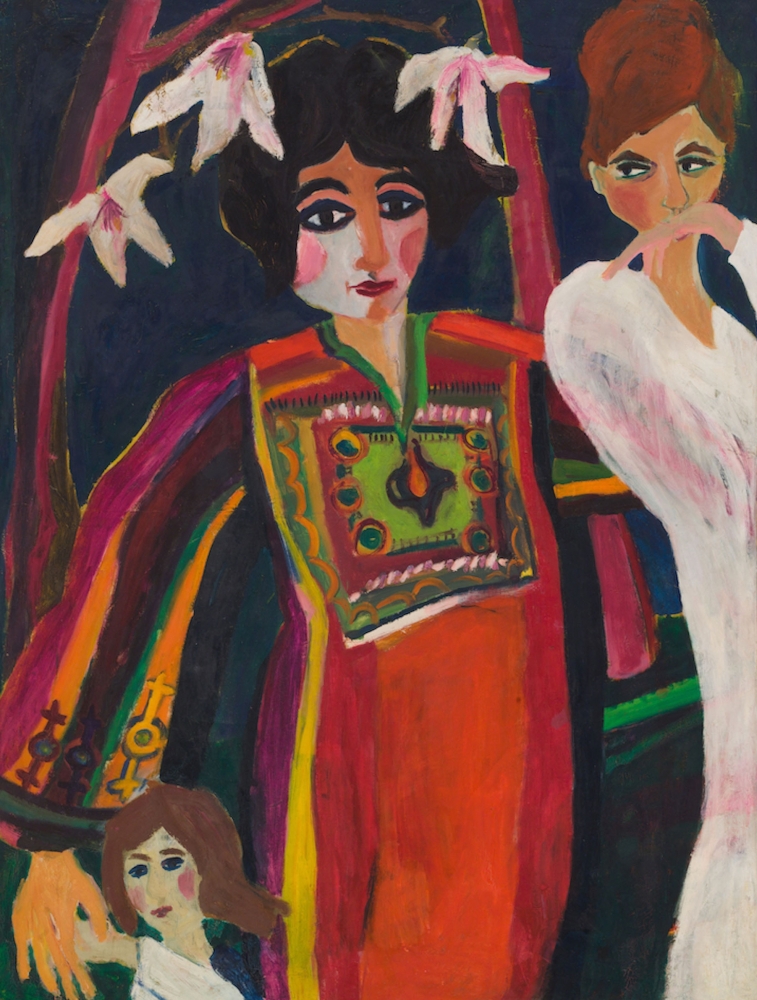 In 1959, Gross traveled to Europe, becoming a student of Oscar Kokoschka’s in Salzburg. In the summer of 1961, she traveled with Grooms and three other artists from Florence to Venice in a horse-drawn carriage, painted and decorated by Gross, stopping at villages to stage a shadow puppet show. The project, titled Il Piccolo Circo d’Ombre di Firenze, became raw material for dozens of paintings and works on paper made during the journey.

From 1960-1976, Gross collaborated with Grooms on large, multidimensional installations, including the fabled “Ruckus Manhattan” and several films.  Gross continues to work in what she terms 2 ½ D, referring to painted and cut forms, in metal, cardboard, and paper that are overlapped and positioned in space. She has also collaborated with the dancer Douglas Dunn on more than 25 dances, designing sets and costumes.

Gross’s work can be found in the collections of the Jewish Museum, New York; the New York Public Library; and the Metropolitan Museum of Art, New York. She is the recipient of awards and grants including from the New York State Council on the Arts, the National Endowment for Visual Arts, the American Academy and Institute of Arts and Letters, and a “Bessie” for sets and costumes.

Gross grew up in South Harlem in Manhattan. Her father was Chaim Gross, the sculptor known for woodcarving, and her parents were consummate art collectors. Now, her family’s collection is housed in the Renee and Chaim Gross Foundation on LaGuardia Place, where Gross serves as President of the Board.

Katharine Under the Persimmon Tree, 1961 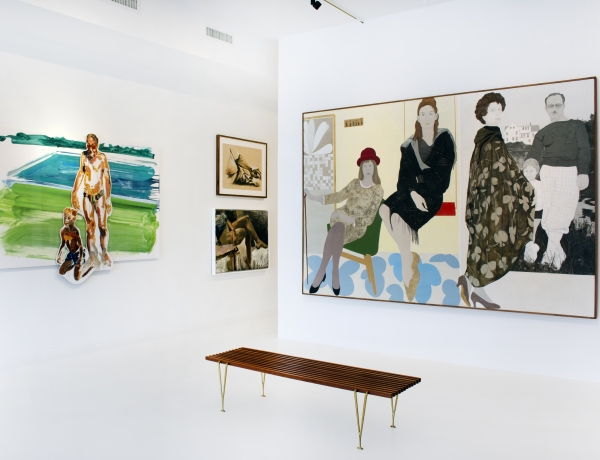 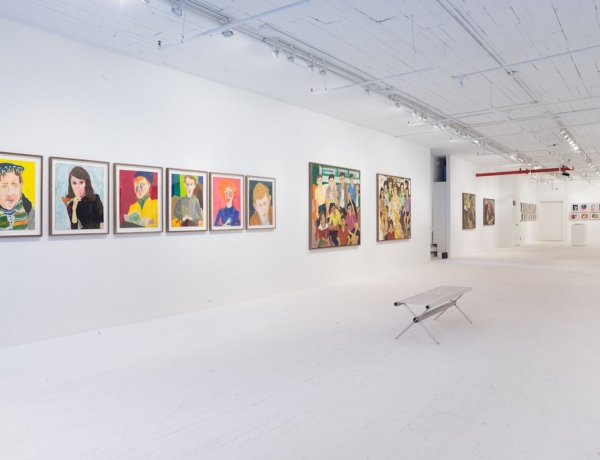 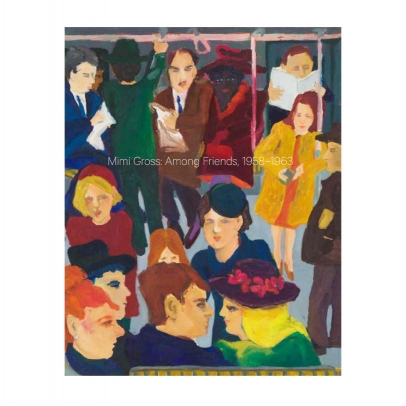 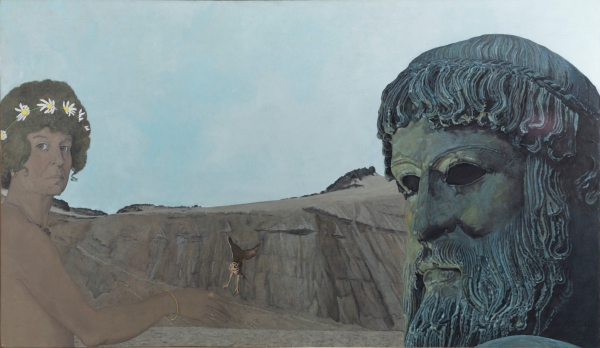 Titled “Double Portrait,” this electrifying exhibition unites Mimi Gross and Marcia Marcus, who began making figurative paintings in the 1950s. Born 12 years apart, Ms. Marcus and Ms. Gross crossed paths in downtown New York, as well as on sojourns to Italy and Provincetown. Both were putting paint to canvas at a time when Minimalism and Conceptualism reigned supreme, and both were interested in representations of their gender. 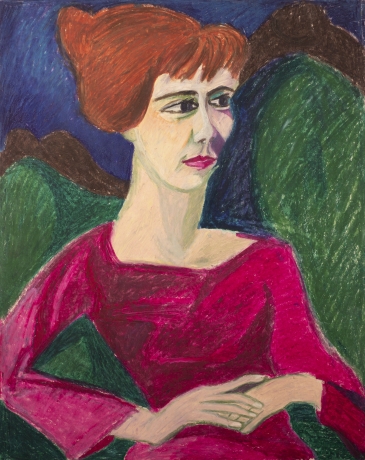 This exhibition explores the personal vision of iconic artists of the 1950s and 1960s. Many artists of the mid-twentieth century felt that academic traditions and the societal conventions they implied had become obsolete. 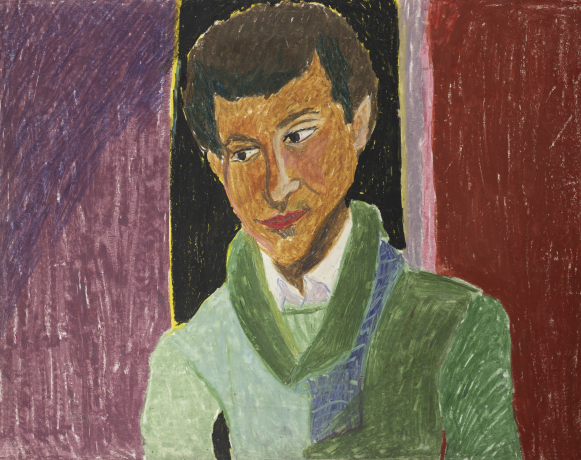 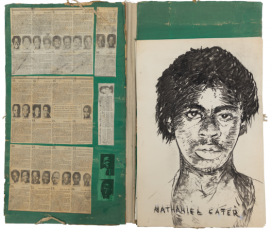 From 1979-1981, over twenty-eight children and young adults were abducted and murdered in the city of Atlanta. Collectively known as the Atlanta child murders, the killings drew the attention of the nation and altered daily life in the de facto capital of the South. The city imposed curfews. Some parents withdrew their children from school and forbade them from playing outside. On June 21, 1981, Wayne Williams was arrested and ultimately convicted of two murders and sentenced to two consecutive life terms. This past March, the Mayor of Atlanta, Keisha Bottoms, reopened the cases hoping to use modern technology to lead to further convictions. Williams maintains his innocence. 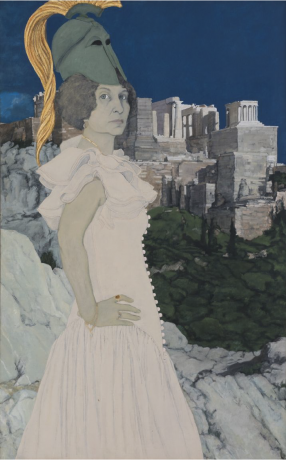 I was reminded of the phrase, Other Traditions (2001), the collective title John Ashbery gave to the publication of his six Charles Eliot Norton lectures at Harvard University, when I was looking at Marcia Marcus’s grisaille portrait of “Edwin Dickinson” (1972) in the timely exhibition, Double Portrait: Mimi Gross and Marcia Marcus, at the Shirley Fiterman Art Center at the Borough of Manhattan Community College (May 23–July 27, 2019), curated by Lisa Panzera. 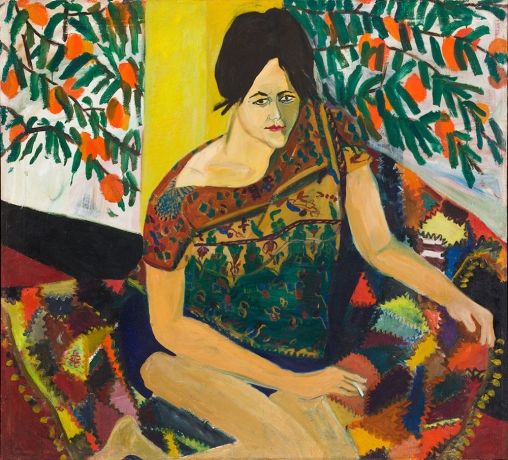 Among Friends: 1958–63, the exhibition of Mimi Gross’s paintings and drawings from the early 1960s at Eric Firestone Gallery, is not only a sheer visual pleasure, it also adds to our understanding of American modern art. Like so many “re-discovered” bodies of work, usually by women, it reveals dimensions of artistic practice that were always present but never given critical attention within certain over-determined narratives of 20th-century art. 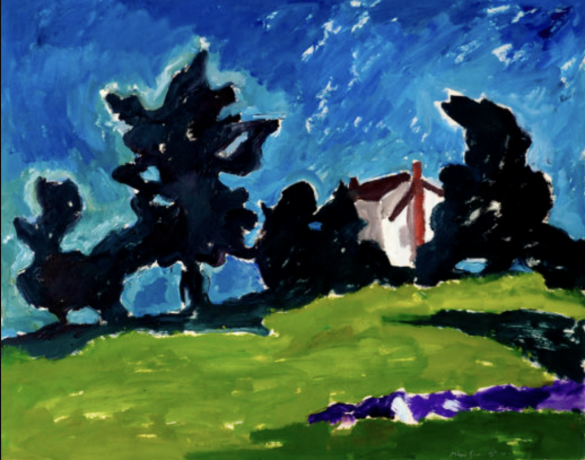 Slab City Rendezvous, whose title comes from a 1964 painting by Red Grooms, features the work of a group of young New York-based avant-garde artists who in the years following World War II discovered the pleasures of summering and working in Maine. They became some of the most successful and important artists of their generation, charting new directions for contemporary art. Their work presented a return to realism and figuration in the face of Abstract Expressionism, the style then dominating the increasingly important center of international contemporary art in New York. Their accomplishments formed another chapter in the story of Maine’s ongoing role in American art. 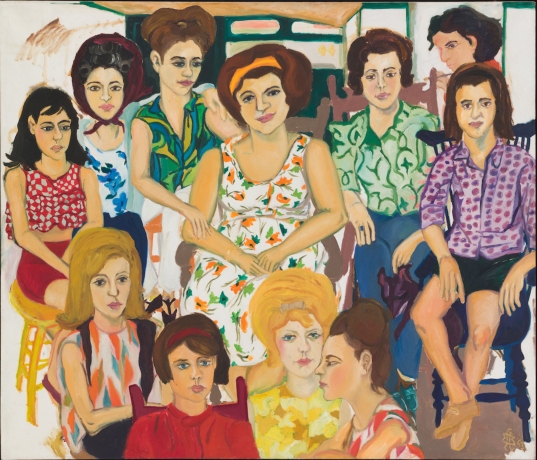 Practically overflowing with radiant portraits, “Mimi Gross: Among Friends, 1958–63” at Eric Firestone Loft should be of the major crowd-pleasers of the moment, but it feels like it’s flying under the radar. Channeling a rare, quicksilver sense for detail, Gross was only in her late teens and early 20s when she made these pieces in crayon, paint, and pastel, working in New York, Provincetown, and Europe, where she and friends traveled northern Italy by horse-drawn carriage, doing shadow-puppet shows in small villages. (To think that young artists today believe a night at Berghain is bohemia!) Two highlights of many: Grand Street Boys and Grand Street Girls (both 1963), whose many young sitters look interesting enough to sustain a few seasons of prestige television about the Lower East Side during the Kennedy years. The show depicts an artistic life that was just getting started, and already being lived very well. 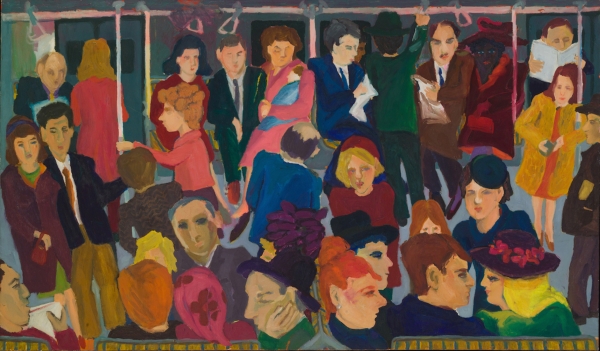 The Radiant Fearlessness of Mimi Gross, By John Yau

The exhibition Mimi Gross: Among Friends, 1958-1963 helps to set the record straight: Gross was a strong, confident artist when she met Red Grooms at the age of 18, and that her work continued to grow right up to their marriage in 1964. 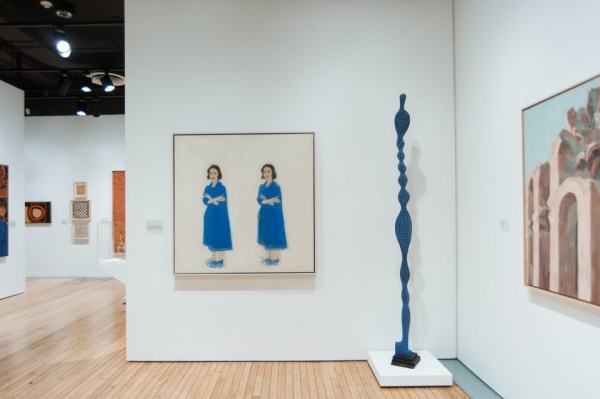 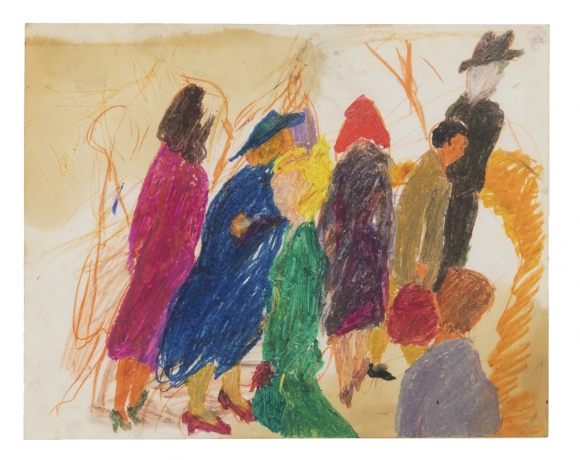 Critical Eye: Mimi Gross in Her World By Dan Nadel

For the past four decades, Mimi Gross has lived and worked in a broad, art-filled loft just below Canal Street in Manhattan. Visitors are greeted by an enormous and exuberant painted sculpture—Gross calls it a “2½-D” work—in which the artist portrays her friends from the heyday of New York’s downtown bohemia in the poses and setting of Delacroix’s Women of Algiers in their Apartment (1834). It is, like so many things Gross does, a deft blending of history, observational portraiture, and ingenious craft.